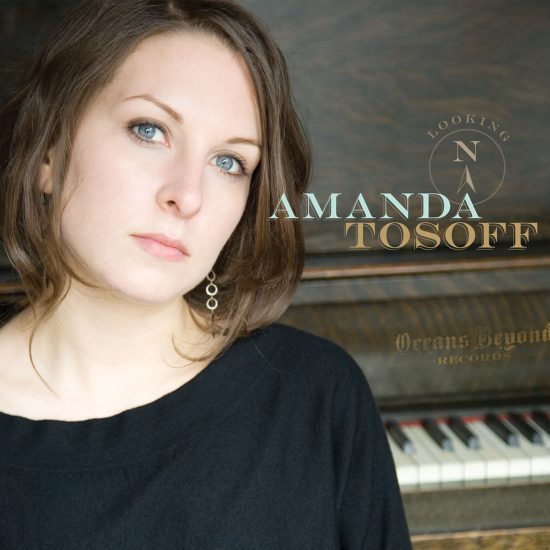 Amanda’s 3rd album, Looking North, marks a momentous occasion in her life – making the big move to Toronto from her home town Vancouver, and stepping into the a new music scene on the east coast. The album features fellow BC-born, but NYC based trumpeter Ingrid Jensen, as well as Toronto-based saxophonist Kelly Jefferson and trombonist William Carn. These 3 horns augment Amanda’s long-time quartet with saxophonist Evan Arntzen, basset Sean Cronin, and drummer Morgan Childs for an album of all original music that showcases Amanda’s “knack for animating her material with fine counterpoint and colourful sonic combinations” (Peter Hum, Ottawa Citizen)

Looking North greets listeners with a feel-good, infectious vibe, as drummer Childs — who fuels the music smartly and powerfully throughout the disc — lays down an undulating New Orleans-style beat. Bluke (as in a blues for Duke Ellington) is a a funky blues distinguished by some classy counterpoint and Tosoff’s cool electric piano. The writing for horns nods to Ellington’s Far East Suite, but the solos by Carn, Jefferson and Tosoff are new-generation catchy and immediate.

M.I.A. is another Tosoff tune with Ellington at its root. I don’t know Mercuria, The Lion, the Duke piece that Tosoff admits she’s borrowed from, but her own piece is forthright swinging tune with its own identity. Arntzen’s soprano saxophone and Jensen’s trumpet give Tosoff’s melody wings, and their solos, aided by the righteously swinging rhythm section, are substantial and pleasing. Concept 2010 is a slightly more modern and post-bopping, less Ducal take on swinging. The tunes that have lodged most deeply in my memory on the most overtly lyrical, expansive ones. Invisible, brought in by Cronin’s weighty, inspired introduction, is a bolero-style ballad and a showcase for Arntzen’s emotional tenor saxophone, which recalls Joe Henderson at times.

Tosoff shines most on Leaves Changing, a pastoral ballad that features her electric piano and some nice writing for horns behind her. Two more tunes with Carn and Jefferson enlarging the size of the ensemble are similarly vivid. Goodbye Gray Sky is a slow, classy, swinging waltz with Jefferson and Jensen stepping up with direct, powerful solos. Sounds Through The Window is a nice imaginative stretch. For the most part, it’s a highly rhythmic, “African” take on 5/4 (or 15/8, if larger numbers suit you). Tosoff uncorks some of her most impressive playing on the CD above a bed of complimentary percussion before some spirited trading for four horns [see video below]

The title track is in fact a short but evocative piano solo, with which Tosoff meant to convey an impression of the Rockies near Banff. It’s followed by the disc’s moody, modern closer, Got It, ostensibly spun off from Duke Ellington’s I Got It Bad. It’s another richly layered effort by Tosoff, with Arntzen and Tosoff dancing together melodically before a prolonged, scene-shifting coda gives Jensen a fitting final word for the CD.