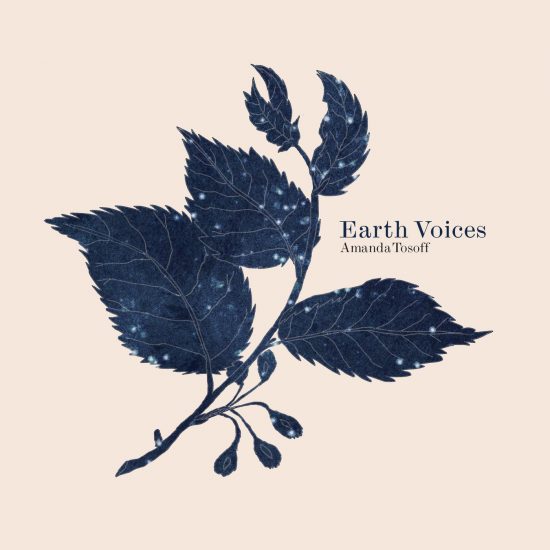 Merging the deep, powerful messages of poetry with adventurous modern jazz, Toronto-based pianist and composer Amanda Tosoff leads a hybrid ensemble with strings and seven rotating vocalists on her latest album Earth Voices, the follow-up to her Juno Award-nominated 2016 release Words (“a grand achievement” – CBC Radio). The album is being released by Empress Music Group, a label and company founded by award-winning vocalist Emilie-Claire Barlow.

Earth Voices is Tosoff’s sixth album as a leader and the second to feature vocals. But whereas Words featured the marvelous singing of Felicity Williams straight through, Earth Voices adds six additional vocalists to the lineup in turn, each ideally suited to the song at hand. The compositions and orchestrations are sonorous, texturally rich, with violinist Aline Homzy, cellist Beth Silver and (on four tracks) guitarist Alex Goodman augmenting the lineup. The performances, full of eloquence and fire, are centered by Tosoff’s assured and lyrical pianism, revealing an artist at the peak of her powers.

“Over the last five years, I’ve toured all over the world in Emilie-Claire’s band,” says Tosoff. “She’s such an inspiring artist, and I’m so excited to be on her label and have her singing on this project.” Barlow’s voice (heard on “A Dream Within a Dream”) captures the subtle sense of awe and dread in Poe’s poem, which concerns life’s fleetingness and the too-quick passage of time. But not only does Barlow’s voice begin the album — it also ends it, on Tosoff’s “Finis,” with lyrics from early 20th-century Canadian poet Marjorie Pickthall. “The poem is pretty traditional in form and I just love the imagery and message,” says Tosoff, who sought to capture Pickthall’s framing of life’s journey, from hours to days to years.

Whitman’s “To a Stranger” occasions something wholly new from Tosoff: her first foray into string quartet writing, with violinist Jeremy Potts and violist Laurence Schaufele joining Homzy and Silver, and Felicity Williams giving lyrical flight to Whitman’s enchanting verse. “This poem is near and dear to me,” says Tosoff. “I discovered it during a lonely time, and it spoke to me of the idea of twin souls, of searching for that person, keeping hope alive that you can find him or her. The music started off as a piano arrangement and I pared it down to four voices and arranged it for strings. It’s through-composed, nothing repeats — it takes a journey like the poem does.”

“Birdwings,” another of the four Tosoff originals, takes its lyrics from 13th-century Persian poet and Sufi mystic Rumi, with the silky-toned Alex Samaras — the album’s only male voice — bringing it all to life. “Your grief for what you’ve lost lifts a mirror up to where you’re bravely working,” the poem states. Tosoff remarks: “This poem made me think of a friend who suffered a traumatic brain injury. Despite his pain and loss, he had a really amazing attitude — he saw his injury as an opportunity to begin again and to learn how to really just be in the moment. The poem has a lot of beautiful imagery, and it feels like you are ascending out of grief, like a bird taking flight, which I tried to capture in the music.”

Samaras also appears, in male-female duet features, on “Here and Heaven” and “Oh, Life,” with Michelle Willis and Laila Biali. The former is an almost ancient-sounding folk song from The Goat Rodeo Sessions, the 2011 collaboration between Yo-Yo Ma, Aoife O’Donovan, Edgar Meyer, Chris Thile and Stuart Duncan. New harmonies and modified rhythms creep into Tosoff’s arrangement, which is otherwise faithful to the beguiling aesthetic of the original.

Mike Ross, musical director of the Toronto musical theater company Soulpepper, wrote “Oh, Life” (originally titled “Bertie Hume”) for a production called Spoon River. “The play is based on an anthology of poems by Edgar Lee Masters that narrates the lives and losses of residents in a fictional town called Spoon River,” Tosoff explains. “In Soulpepper’s adaptation, everything is centered around the funeral of a girl named Bertie Hume. This song is the climax when she emerges from the coffin to sing it — and wow, it was gorgeous! It brought me to tears. Laila Biali, originally from my hometown of Vancouver, was the perfect fit for this song.”

Fittingly for a Canadian jazz musician, Tosoff includes an homage to Alberta-born Joni Mitchell, the stark and powerful protest song “The Fiddle and the Drum” from Clouds. Mitchell’s version is wholly a cappella; in Tosoff’s rendering, Lydia Persaud begins in exactly the same fashion, intoning Mitchell’s uniquely contoured melody until the piano and ensemble come in, suggesting new harmonic horizons. Persaud’s powerful vocal performance, as well as Allison Au’s alto solo, are especially soulful and compelling.

Luciana Souza’s “Sonnet 49,” from the famed Brazilian singer’s 2004 album Neruda, sets Pablo Neruda’s poem against a polyrhythmic triplet pattern originally played by Souza herself on kalimba. Tosoff’s arrangement preserves that triplet feel but adds new elements, including an uplifting virtuoso piano solo in a grooving 6/8. Robin Dann, who works with Felicity Williams in the Toronto-based indie band Bernice, sings Neruda’s words with a disarming intimacy, outlining the beauty of Tosoff’s imaginative departures in form and harmony. The words “that is why I sing to the day and to the moon” mark an especially affecting transition in the piece.

What started as a bold experiment, a foray into poetry and music in 2016 with Words, has become a fully realized and ongoing vehicle of expression for Tosoff. Having had the chance to tour the Words project extensively, she began to supplement her set lists with new poetic material, much of which would end up appearing on Earth Voices. Transitioning these pieces from the road to the studio was a process, and a challenge, but one that allowed Tosoff’s exceptional talent to flourish in all its many dimensions. The result is both a continuation and a new journey of its own, indicative of great things to come.